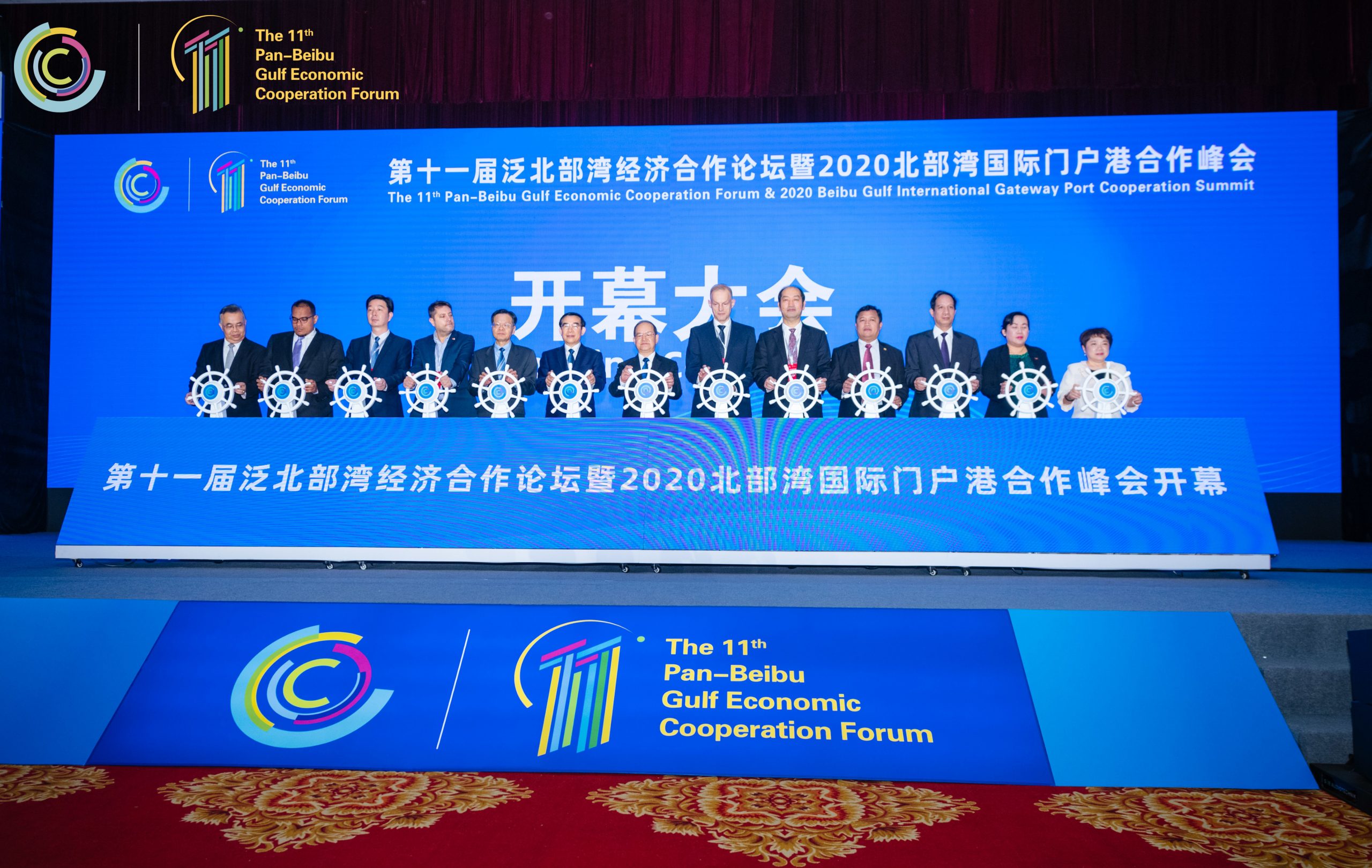 The 11th Pan-Beibu Gulf Economic Cooperation Forum and the 2020 Beibu Gulf International Gateway Port Cooperation Summit took place in Nanning, Guangxi from 14 October to 16 October 2020. The Forum and the Summit were organised by the Office on Planning, Development and Management of Beibu Gulf Economic Zone of Guangxi Zhuang Autonomous Region,the National Development and Reform Commission of the People’s Republic of China, Ministry of Transport, China, Ministry of Commerce, China (MOFCOM), the People’s Government of Guangxi Zhuang Autonomous Region of China, Ministry of Commerce of the Kingdom of Thailand, Ministry of Trade and Industry of the Republic of Singapore, etc. Policy makers, representatives of trade enterprises, academic researchers from ASEAN countries and China attended the Forum and Summit both physically and virtually considering the ongoing pandemic.

According to MOFCOM in September 2020, the first three quarters’ trade data reveals ASEAN has risen to become the top trading partner with China. Representative from the Ministry of Transport of the People’s Republic of China also announces in the Forum that the Beibu Gulf Port has seen a 20% rise in its cargo handling capacity and 35% rise in its container handling capacity relatively this year. Considering the Beibu Gulf Economic Zone is also the only region in China that is connected to ASEAN both by land and by sea, these figures signify ASEAN and China’s robust trade relations. Within these very contexts, the Forum aimed to take a close look at how, ASEAN and China can strengthen their ports and trade cooperation facing new opportunities and challenges arise from the changing international trade arena amid the very situation of COVID 19. The Forum has been themed on “Focusing on International Gateway Port – Jointly building new International Land-Sea Trade Corridor”. To gain the newest insights on policies / measures set out by various stakeholders supporting the sustainable trade facilitation between the ASEAN countries and China, and therefore disseminate these information to its focus countries, the GIZ Support of Regional Economic Cooperation in Asia (SRECA) project implemented on behalf of the German Federal Ministry for Economic Cooperation and Development (BMZ) attended the Forum.

ASEAN representatives, mostly from the Ministry of Transport, Ministry of Commerce or Departments of Planning and Investments reached the common recognition that to have seen strengthened trade relations within the region, the existing land-sea trade corridors have demonstrated their efficiency, and “connective” ports such as the Beibu Gulf Port in China, Sihanoukvile Autonomous Port in Cambodia, Port of Singapore, Port of Saigon in Ho Chi Minh City, Vietnam and more have been serving as effective logistic bases and transportation nexus. They aim to explore how experience sharing on the digitalisation of port management and the development of more efficient logistic channels can further empower the trade relations in the region.

Representatives from China, among which many from the Ministry of Transport, Guangxi People’s Congress, and governments of other Chinese provinces which serve as crucial in-land/coastal logistic bases, also suggested for upgrading the regional industrial chain management by enhancing the infrastructural development and connectivity of rail, road, ports, airports, electricity supply services and telecommunications services in the region. The Director General of the Ministry of Transportation in China, Li Xiao Peng suggests ASEAN countries and China to together strengthen the four-in-one “hardcore connection” via land, sea, air and internet, and at the same time, communicate and endorse policies, regulations and standards which can ease the trading procedures for countries in the region.

All representatives recognise that the leverage of internet connectivity and policy dialogues within ASEAN countries, and between ASEAN countries and China are especially significant during and post the COVID 19 pandemic.

Back to back with the forum, the 2020 China-ASEAN Port Cities Cooperation Network Work Conference was also held. The conference discussed how financial institutions across ASEAN countries and China can play a crucial role to mobilise investments in the technology innovation of port cities. In addition, how connectivity between the port cities in the region can lead to higher transparency in port management.